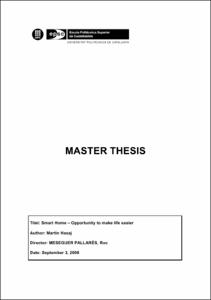 Document typeMaster thesis
Rights accessOpen Access
Abstract
A great deal of contemporary research is showing that it is not work that goes home but home that goes to work. I would like to write my thesis about smart home possibilities (theoretically), which are available, or proposed to the market. Then I would like to make a business plan for hypothetical company which wants to arrive to the market with smart homes development. Finally, I would like to design (practically) part of smart home according to available technologies. I am more considered in the SW part of the problem, but I want to use real hardware if it would be possible rather then the simulator. The SW should be portable written in JAVA, developed on LINUX ( better hardware support ). It should be able to manage all smart home interfaces and extensible. Brain of the system should be Neural Network, which should be able to learn automatically the inhabitants behaviour and help them in their everyday routine. Make them disappear and you have succeeded. For example, if system finds out that some switch is turning on every time after doors are open, it will turn it on automatically. But it should consult his decisions in the beginning t avoid collisions with human decision (according to Asimov rules :) These shall avoid starting mixer while nothing in there, or even turning lights on when nobody is at home ( only if it is necessary according to security policies). The system shall communicate throw the network, which could be wired, or wireless. I search the technologies available and found some of them but I will need to decide which one to use. I prefer the "over power lines" transmitting because it is less expensive in real houses, but may be it's possible to use bluetooth or wi-fi as well.
SubjectsHome automation, Domòtica
URIhttp://hdl.handle.net/2099.1/5419
Collections
Share:

Except where otherwise noted, content on this work is licensed under a Creative Commons license : Attribution-NonCommercial-ShareAlike 2.5 Spain