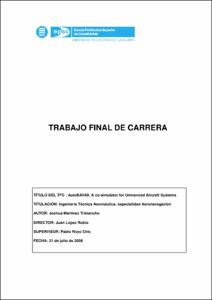 Document typeMaster thesis (pre-Bologna period)
Rights accessOpen Access
Abstract
This TFC document shows the requirements and the components needed to integrate in the same scenario, real Unmanned Aircraft Systems (UAS) and simulated systems. This is called co-simulation. An UAS is a series of onboard avionics systems and an on ground platform, which might takeoff, fly a mission and land safe without a human intervention. UAS Service Abstraction Layer (USAL) is a set of available services running on top of the UAV system architecture to give support to most types of civil UAS missions. These services are managed and communicated by a thin software layer called Architecture for Remote Embedded Applications (MAREA). This Middleware promotes a publish/subscribe model for sending and receiving data, events and commands among the services of the UAS. The Icarus Simulation Integrated Scenario (ISIS) is a collection of reusable services that comprises a minimum common set of elements that are needed in most UAV missions. Some of these services conform the co-simulator. This ISIS integrated scenario is useful to test the platform before the UAS flies. The ICARUS team has developed his Service Oriented Architecture (SOA) platform where is set the real UAS. The co-simulator is an Open Architecture. It may have a Visor Service, some Virtual Vehicles and Virtual Services and a Manager of Virtuality. This co-simulator gives capabilities in fast prototyping and simulation to the UAS Service Abstraction Layer (USAL). Fast prototyping is reached by the use of standards and components. It allows a fast design and implementation of new functionalities. Simulation is used for increase safety and reduce design cost. When a service abstraction layer is used, a virtual implementation has similar effects like the real ones. My job for this TFC was to design and to implement some solutions which conform a co-simulator for Unmanned Aircraft Systems. This co-simulator has been called AutoNAV4D93. There are many things to add to the co-simulator and it may be accomplished in a future as a result of ISIS developing work. The ISIS integrated scenarios will be presented in the AIAA’09 Meeting and exhibit in 9 of January 2009.
SubjectsAvionics, Drone aircraft, Avions no tripulats
DegreeENGINYERIA TÈCNICA D'AERONÀUTICA, ESPECIALITAT EN AERONAVEGACIÓ (Pla 2003)
URIhttp://hdl.handle.net/2099.1/5357
Collections
Share:

Except where otherwise noted, content on this work is licensed under a Creative Commons license : Attribution-NonCommercial-ShareAlike 2.5 Spain