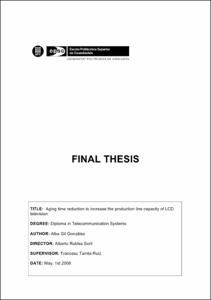 Document typeMaster thesis (pre-Bologna period)
Rights accessOpen Access
Abstract
The aim of this project is to make a study on the reduction of the aging time of a Sony LCD television to increase its production at the company. The aging time is a period of time when the turned on LCD television is working with a white pattern, with the maximum luminance and the maximum backlight to adjust its colorimetry and luminance levels. Due to the structure and design of production lines and the capacity needs of the company, the ageing time information specified by Design Department represents a bottleneck at the assembly process of the television. In fact, there are two possibilities to get to the desired result with the necessary time. The first one is to invest in structure and space to lengthen the production lines, and the second and chosen one is to reduce the ageing time to increase the production. To reduce the ageing time we should find how to model the television behavior out from a mathematical equation. Also, with the help of 6s parameter we would estimate the behavior and the characteristics of the television with two variables: the television operation time and the television exterior surface temperature, both of them correlated. With this information we will be able to determine which the minimum aging time is in order to increase the production of televisions.
SubjectsLiquid crystal displays, Sony televisions, Pantalles de cristall líquid
DegreeENGINYERIA TÈCNICA DE TELECOMUNICACIÓ, ESPECIALITAT EN SISTEMES DE TELECOMUNICACIÓ (Pla 2000)
URIhttp://hdl.handle.net/2099.1/4972
Collections
Share: