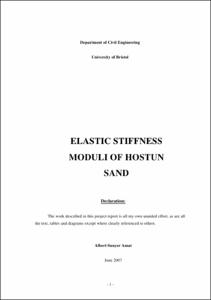 The main aim of this thesis was to interpret the natural anisotropy of a soil using new experimental transducers called bender and extender elements in a Triaxial Cell Apparatus. Firstly a specimen had to be prepared with a desired relative density using a technique called Pluviation. Secondly a tricky procedure had to be overtaken in order to install and protrude the transducers in the sample properly. The third step was to set up the Triaxial Cell Apparatus and apply an isotropic pressure to the soil sample. That done, a good interpretation of the signal waves passing through the sample in either vertical or horizontal directions had to be well understood. The final step is to apply some wave formulae in order to asses some results. All the data obtained was then compared with recent research done by Dr Tarek Sadek (Bristol, 2007) as a PhD student at the University of Bristol. The degree of anisotropy, the elastic shear and constrained modulus in the field of very small strains were the data studied and compared in detail. One of the most important difficulties encountered was to set up properly the whole device bearing in mind that for the horizontal transducers there was no space already done so a new development needed to be invented. Some big troubles were created but thanks to some advice from my supervisors and from the technician they were overtaken. Another issue found was how to interpret wave output data because first of all its signal some times was particularly not clear and secondly because there was not an objective method to assess it without doubt. Therefore, some wave theory has been explained by the author as well as some improvements to try to achieve the best interpretation with the minimum subjectivity.
SubjectsSòls
URIhttp://hdl.handle.net/2099.1/4935