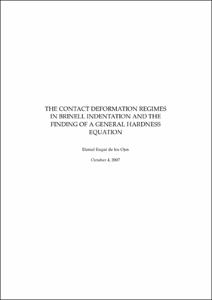 This work concerns analysis of spherical indentation experiments through extensive finite element simulations involving the J2 flow and the J2 deformation plasticity theories both under finite and infinite deformations to gain a fundamental comprehension into the mechanics of the transition between elasto-plastic and fully-plastic contacts. A decrease in hardness with increasing penetration is found to be a manifestation of the differences in material pileup responses between the two plasticity theories, so that in contrast to prior investigations, a peak in hardness cannot be taken to mark onset of a so-called finite deformation fully-plastic regime. The accuracy of Tabor’s hardness relation is examined in detail in light of the simulations and a general relation is proposed through dimensional analysis to correlate hardness with the uniaxial mechanical properties for any arbitrary elasto-plastic or fully-plastic contact. Experiments are also performed in different groups of metallic materials and a methodology is proposed to extract yield strength ys and power-law strain hardening parameter n from a minimum of two hardness measurements performed at different penetration depths. Influence of pressure sensitivity in the extracted properties is then examined through the experimental results. The issue of the uniqueness in the extracted properties and of frictional effects between indenter and material are briefly covered. The investigation ends with a discussion on the robustness of mechanical property extractions through single crystal spherical indentation experiments. Along these lines, consistency is found between simulations with the flow theory of plasticity and the crystal plasticity model for fcc metals. Finally, the potential of spherical indentation to distinguish between single crystal elastic and plastic anisotropy is considered.
SubjectsDeformations (Mechanics), Materials Testing, Elasticity, Deformacions i tensions, Assaigs de materials, Elasticitat
URIhttp://hdl.handle.net/2099.1/4491