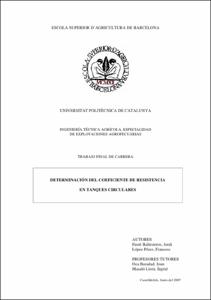 The objective of this work is to develop a methodology to characterize from the hydrodynamic point of view in a circular tank using a acoustic velocimeter techniques techniques, as well the design and construction of a structure for the correct hold of the probe. An experimental design was out, which consists of the creation of a structure that allowed precise displacements of the probe. Different configurations were made in which different volumes, inlet diameters and heights of water were used. Data acquisition consisted in the measurements in a series of points of the tank. From the program of the probe, called HorizonADV, the data acquisition was made later data were filtered by an specific program called WinADV. Calculations were made using a spreadsheet to find the resist tank coefficient. The comparison of the obtained results has indicated that there are in the different points a the tank. With these velocities, has been found the integrated velocity of the tank and its respective resist tank coefficient. Tank coefficients, were very similar. This gives to understand, that resist tank coefficient was stable and that it can be very useful in order to obtain the desired velocities self-cleaning, within a safe range for fish of velocities.