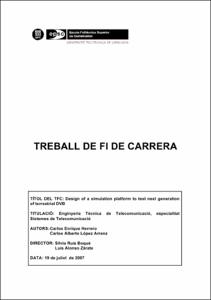 CovenanteeFundació i2cat
Document typeMaster thesis (pre-Bologna period)
Rights accessOpen Access
Abstract
Digital Terrestrial Television Broadcasting (DTTB) is a member of our daily life routine, and nonetheless, according to new users’ necessities in the fields of communications and leisure, new challenges are coming up. Moreover, the current Standard is not able to satisfy all the potential requirements. For that reason, first of all, a review of the current Standard has been performed within this work. Then, it has been identified the needing of developing a new version of the standard, ready to support enhanced services, as for example broadcasting transmissions to moving terminals or High Definition Television (HDTV) transmissions, among others. The main objective of this project is the design and development of a physical layer simulator of the whole DVB-T standard, including both the complete transmission and reception procedures. The simulator has been developed in Matlab. A detailed description of the simulator both from a functional and an architectural point of view is included. The simulator is the base for testing any possible modifications that may be included into the DVB-T2 future standard. In fact, several proposed enhancements have already been carried out and their performance has been evaluated. Specifically, the use of higher order modulation schemes, and the corresponding modifications in all the system blocks, have been included and evaluated. Furthermore, the simulator will allow testing other enhancements as the use of more efficient encoders and interleavers, MIMO technologies, and so on. A complete set of numerical results showing the performance of the different parts of the system, are presented in order to validate the correctness of the implementation and to evaluate both the current standard performance and the proposed enhancements. This work has been performed within the context of a project called FURIA, which is a strategic research project funded by the Spanish Ministry of Industry, Tourism and Commerce. A brief description of this project and its consortium has been also included herein, together with an introduction to the current situation of the DTTB in Spain (called TDT in Spanish).
SubjectsDigital television, Televisió digital
URIhttp://hdl.handle.net/2099.1/4218
Collections
Share: