Bus network operations and management in Chicago and Barcelona: The effects of larger stop spacing on social profitability 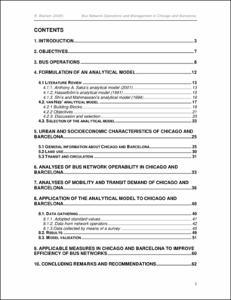 Document typeMinor thesis
Rights accessOpen Access
Description
The "Eixample" neighborhood in Barcelona and the city of Chicago present a similar orthogonal structure of roads and streets. The surface transportation network is influenced by this fact and management of bus routs must be adapted to urban morphology and to demand space distribution. However, parameters of mobility, demand space distribution, and land use constitute a set of significant differences in the socioeconomic parameters of the two cities, which has resulted in differences in the operability of bus routes in the cities. This motivates analyzing the network typology to find out the most efficient bus network. In this study, an analytic model will be developed to consider the costs associated with transportations system users, administration, and operator in order to evaluate the social profitability of each bus network. In the analyses, such parameters as stop distance, bus route distance, and frequency of the service will be used. The deficiencies and potentialities of each network will be identified and set of improvement measures will be proposed in order to minimize the total costs of the bus operations. The analysis in both cities showed that the network can be improved in order to reduce costs and travel time as well. The most interesting measure proposed in this study is the implementation of larger bus stop spacing in both cities, which would lead to lower operational costs and more attractive transit networks.
ProvenanceAquest document conté originàriament altre material i/o programari no inclòs en aquest lloc web.
DegreeENGINYERIA DE CAMINS, CANALS I PORTS (Pla 1995)
URIhttp://hdl.handle.net/2099.1/3276
Collections
Share: