Nearshore waves in the Rhone Delta. Implications for alongshore dynamics 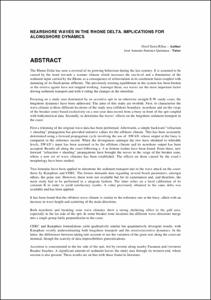 Document typeMinor thesis
Rights accessOpen Access
Description
The aim of this thesis is to characterise the wave climate and the longshore dynamics in the area around Beaduc’s gulf and spit in the coast of the Rhone Delta.Departing from a wave data record at an intermediate location near Beaduc’s spit, the wave climates offshore, nearshore and at the breaker zone have been determined. A general methodology for the obtention of such data in any other situation has been established, involving the use of SWAN and “shoaling + refraction” propagation methods.The effects of the waves on the coast’s longshore evolution have been studied by applying CERC and Kamphuis formulations in points along the shore fed with the wave climate data previously acquired. Kamphuis formulation has only partially been applied with a varying grain size.
URIhttp://hdl.handle.net/2099.1/3259
Collections
Share: