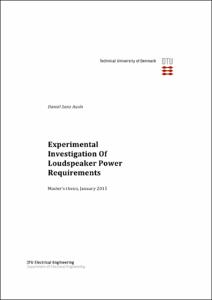 Except where otherwise noted, content on this work is licensed under a Creative Commons license : Attribution-NonCommercial-NoDerivs 3.0 Spain
Abstract
The components of a sound system, whether it is a small system for an electronic device or a high power one, need to be designed to meet certain power requirements. For this, manufacturers often design these components using test-signals, which have an unchanging amplitude. These are very different from real audio signals, because, in audio, the amplitude is continuously changing over the time, and high power peaks can be found, which have a small duration in comparison with the continuous low power values. This project follows the work done by a group of PhD students and professors of the Technical University of Denmark, where the power requirements of a loudspeaker were investigated when it is reproducing different audio files. For this, over 400 songs were used, and the simulations were done with the mathematical linear model of the loud-speaker, which will also be explained in this document. The results of the simulations showed, as expected, that loudspeakers have a high power consumption for short amounts of time, and a low continuous power consumption. The goal of the investigation is to avoid oversizing and unnecessary costs when designing all the units of a sound system, such as the power supply unit, the audio amplifier and the loudspeaker driver. The main goal of this project is to validate the functionality of the mathematical model of the loudspeaker, to make sure that the simulations on this model give the same results as measurements in a real loudspeaker. For this, a circuit has been designed and built, which allows to send an audio signal to a real loudspeaker system and measure the power consumption of the loudspeaker driver. Measurements taken on this circuit have been compared to simulations using the linear and non-linear models, which are also explained in the document. The results show, indeed, that the models simulate the behaviour of the real loudspeaker with high precision, so the results from the simulations are absolutely valid. Moreover, the difference between the measurements on the linear and the non-linear models is very small, which confirms that the linear model is enough for the simulations, which is more simple than the non-linear one. The validity of the mathematical model has been confirmed making measurements with various audio files belonging to different musical styles. The power requirements give very similar results both for the real loudspeaker and the simulation models. Finally, a database of over 100 loudspeaker drivers of the same size has been taken, and simulations have been done on each one of them: all the loudspeakers must have the same sound pressure level response, so a filter is applied to each one to make them all sound the same. Then, simulations have been run and the power requirements have been analysed. The results show how the range of power consumption can be quite wide for the loudspeakers, even if they are similar and are forced to have the same sound response. This explains why design for the worst case needs to be done.
SubjectsLoudspeakers -- Testing -- Mathematical models, Sound -- Measurement, Sound analyzers, Device drivers, Energy consumption, Energy conservation, Altaveus –- Proves -- Models matemàtics, So -- Mesurament, Analitzadors de so, Controladors, Energia -- Consum, Energia -- Estalvi
ProvenanceAquest document conté originàriament altre material i/o programari no inclòs en aquest lloc web
URIhttp://hdl.handle.net/2099.1/26644
Collections
Share: