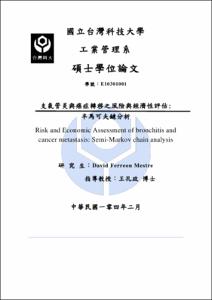 The current situation in Taiwan regarding the Department of Public Health expenses requires study. The gratuitousness of the system promotes an abusive consumption by the population and it is not clear if the amount of money that the government is expending in Health Care is worthy and focuses on the right issues. The aims of this study are two: to find the relationship between common chronic diseases, such as cold, influenza and asthma, respiratory diseases, chronic bronchitis, and lung cancer and its most common metastasis; and to make an estimation of the costs of the medical treatment for these diseases. The study is based on data obtained from the NHI data bank. To do such study, the first step was gathering the data from the National Health Insurance Database (NHIDB), where patient’s medical data is recorded and diseases are encoded following the ICD9 codes. Thereafter, transition times for each transition and patient were calculated by deducting the first visit date of both diseases of the transition. Owing to the absence of data regarding health and death states, some hypotheses were necessary to be assumed in order to set the transitions to such states. One state was removed from the model due to the lack of data and the final sample of population was set. Once the data was gathered, the semi-Markov model was built. It consisted of 10 states including health and death and all the possible connections between them. Using the transition times calculated from the NHIDB time dependent transition probabilities were obtained. Furthermore, with the real treatment costs from the data base a distribution was calculated for each cost. All this was defined as parameters for the simulation. At the same time, the model tree was built on the TreeAgePro software in order to simulate proceed with the simulation. Two different simulations were run: the first one consisted in a transient state study and the second one consisted in a steady state. Afterwards the results of both simulations were obtained and analysed meticulously. To conclude based on the results obtained, this model can be better used to simulate and predict virtual patients for short term simulations (one year). Long term simulation cannot be run using time dependent transition probabilities in such a big model (ten states) because simulated patients do not move to so many states.
SubjectsPublic health administration, Public health -- Economical aspects, Respiratory organs -- Diseases --Treatment, Cost control, Markov processes, Salut pública -- Administració, Salut pública -- Aspectes econòmics, Aparell respiratori -- Malalties --Tractament, Cost -- Control, Markov, Processos de