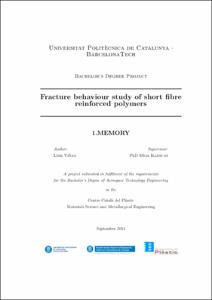 Document typeMaster thesis (pre-Bologna period)
Rights accessOpen Access
Abstract
This study is on the fracture behaviour of short fibre polymers on which fracture toughness (K) is calculated through some testings with the help of LEFM (Linear Elastic Fracture Mechanics) theory. The materials used were Fortron R PPS, Ryton R PPS and PBT. The variables controlled were: notching technique (broaching, femtolaser, pressing and tapping), thickness of the sample (6mm and 9mm) and testing speed (low-speed and high-speed). After the samples were broken, they were analysed using an optical microscope and SEM microscopy. The results found that Fortron and Ryton behaved elastically but PBT was on the verge of being discarded as it might be unsuitable for LEFM analysis. The analysed pre-notches were all equivalent in their radius, but notching depth was higher when using the femtolaser. Notching radius in broaching was bad in comparison to the other techniques. There were no significant differences between the values for fracture toughness between the different notching techniques, making this tapping and pressing very cost-efficient. When analysing the differences on sample thickness effects it was clearly shown that the 6mm samples had much higher fracture toughness, with the main hypothesis being that fibres were more oriented. Finally, no significant differences were shown on testing speed influence, despite being all main values lower on low-speed tests
SubjectsPolymers--Fracture, Composite materials--Fracture, Polímers -- Fractura, Materials compostos -- Fractura, Avions -- Materials
DegreeGRAU EN ENGINYERIA EN TECNOLOGIES AEROESPACIALS (Pla 2010)
URIhttp://hdl.handle.net/2099.1/26031
Collections
Share: