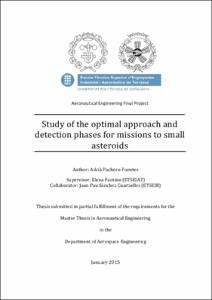 ; Sánchez Cuartielles, Joan Pau
Document typeMaster thesis (pre-Bologna period)
Rights accessOpen Access
Abstract
Nowadays, small asteroids are catching the space community’s attention and interest. Instead of planning expensive missions to planets, missions to small asteroids (<100m) are of interest both because of their lower costs and scientific value. Small asteroids are extremely faint objects that are serendipitously discovered while they are extremely close to the Earth. After a period of only a few days, a newly discovered small object moves far enough from the Earth so that its brightness falls below the detectability threshold of current telescopes. If the length of time that the asteroid has been visible from Earth is not long enough, the uncertainty on its ephemerides may still be high. When a transfer is planned, the spacecraft is sent to a blind point since the asteroid cannot be seen from Earth. It becomes visible only the last days of the rendezvous trajectory. To ensure the meeting between the spacecraft and the object, only asteroids with very accurate ephemerides are targeted. The aim of the project is to gain an insight into optimal approach trajectories in order to ensure that a small object is detected or, failing a total certainty, maximizing the probability to detect it during the close approach. With this aim, the relative motion dynamics in the Hill coordinate frame will be studied and Matlab simulations will be performed
SubjectsAsteroids--Orbits, Orbits, Asteroides, Òrbites -- Mètodes de simulació
URIhttp://hdl.handle.net/2099.1/26022
Collections
Share: