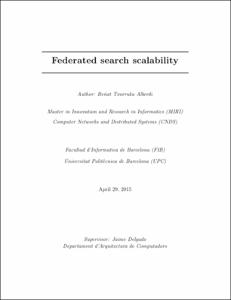 The search of images on the internet has become a natural process for the internet surfer. Most of the search engines use complex algorithms to look up for images but their metadata is mostly ignored, in part because many image hosting sites remove metadata when the image is uploaded. The JPSearch standard has been developed to handle interoperability in metadata based searches, but it seems that the market is not interested on supporting it. The starting point of this project is a broker based federated search for image retrieval which was supposed to be the backbone of the nal software. However, due to out of date state of the previous project a new software has been developed. The objective of this approach is to support scalability on an image search system based on querying to the API of well known image hosting services and providing a tool to analyse images metadata for low level searches. A design is proposed to dodge the API rate limitations, the actual major problem regarding scalability, and a working software is developed to prove its viability. A set of tests are introduced to evaluate the performance of the approach and its results are interpreted. Finally a future work is suggested in order to improve the weaknesses.
SubjectsImage processing--Digital techniques, Imatges -- Processament -- Tècniques digitals
URIhttp://hdl.handle.net/2099.1/25974