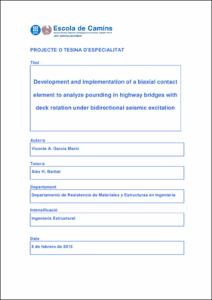 During the last strong earthquakes, the impact between closely adjacent structures was reported as one of the major causes of collapse in buildings and bridges. This impact is also called seismic pounding and is due to the different dynamic characteristics of those neighboring structures that make them to vibrate out of phase and become them in potentially dangerous. In the case of bridges, seismic pounding is the impact produced between deck-deck and deck-abutment. In the common engineering practice, bridges are designed with expansion joints or gaps to allow the expansion of the deck because of temperature, shrinkage or creep of concrete. Since this gap cannot be removed generally, it is a vulnerable part of the bridge when earthquake occurs. In addition, seismic pounding produces severe damage in bridges and even collapse. In this study, a detailed overview of the last strongest earthquakes since San Francisco earthquake in 1906 until Tohoku earthquake in 2011 is presented focusing on different types of damages produced in bridges. Within all these different ways of failure and unlike other types of damages, seismic pounding has been less studied although it was demonstrated to be one of the main causes of damages in bridges during the last great earthquakes. Unidirectional and bidirectional seismic pounding are distinguished and a deep review in the literature is provided to know what has been done so far in the field of seismic pounding simulation in bridges. After that, a brief introduction of physical nature of impact as well as the main existing impact force models divided into linear and non-linear are presented. Then, a proposed impact force model based on a modified Kelvin-Voigt model where frictional forces are involved is developed. This proposed contact element is implemented as a biaxial contact element in an open-source computer program called OpenSees. This computer program was developed at University of Berkeley (California) and is based on the Finite Element Method. It is widely used in earthquake research because of is a powerful tool to deal with dynamic problems where non-linearity’s are involved. Moreover, the new contact element was validated for unidirectional directional using an experiment carried out at Harbin Institute of Technology (China) with encouraging results. Finally, three real and different bridges located in California are taken as seed bridges to study seismic pounding in bridges. Furthermore Kobe, Loma Prieta, Chi-Chi and Landers earthquake are chosen as input ground motions in order to have two pulse-like (Kobe and Loma Prieta) and two far-field (Chi-Chi and Landers) earthquakes. The isolated bridges are modeled in OpenSees and subjected to 2,688 non-linear time history analysis simulations where the gap and the skew angle of decks are the parameters used to study the seismic bridge response. The results show how important the skew angle is and its influence in the performance of the bridge being 45º the worse scenario when pounding occurs.
SubjectsEarthquakes, Bridges, Terratrèmols, Ponts
URIhttp://hdl.handle.net/2099.1/25963