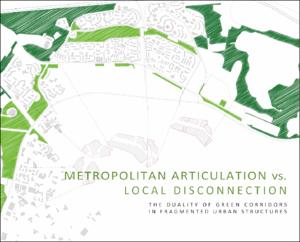 Document typeMaster thesis
Rights accessOpen Access
Abstract
This thesis focuses on analyzing the role that green corridors have in the structure of urban areas in fragmented cities. The pathology we observe is found in the relationship between built zones and lineal elements. The dual interpretation of green corridors (articulation/segregation of urban fragments) causes physical disconnection and visual discontinuity between adjacent urban fragments. Due to this, the following question emerges: if urban continuity is one of the keys to achieve a certain level of urbanity, in which way can segregation, triggered by green corridors, be reversed and converted into an element of urban articulation? The analysis is based on an observation of one of the paradigmatic examples of the fragmented urban structure, the city of Minsk, Belarus, which was completely destroyed after World War II and rebuilt according to Soviet Urban Planning ideologies. Conforming to the new general plan, a new urban model was established, which illustrates the functioning of the fragmented urban structure and the duality of continuous green elements.
SubjectsGreenbelts -- Belarus -- Minsk, Sociology, Urban -- Belarus -- Minsk, Cities and towns -- Belarus -- Minsk -- Growth, Cinturons verds -- Bielorússia -- Minsk, Sociologia urbana -- Bielorússia -- Minsk, Desenvolupament urbà -- Bielorússia -- Minsk
Location
1: "Арх-юнити" архитектурная студия, Minsk, Bielorússia
URIhttp://hdl.handle.net/2099.1/25877
Collections
Share: