Compiler Analysis and its application to OmpSs 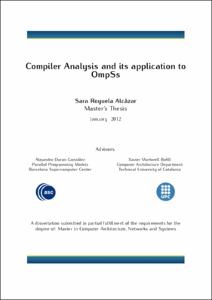 Document typeMaster thesis
Rights accessOpen Access
Abstract
Nowadays, productivity is the buzzword in any computer science area. Several metrics have been defined in order to measure the productivity in any type of system. Some of the most important are the performance, the programmability, the cost or the power usage. From architects to programmers, the improvement of the productivity has became an important aspect of any development. Programming models play an important role in this topic. Thanks to the expressiveness of any high level representation not specified for any particular architecture, and the extra level of abstraction they contribute against specific programming languages, programming models aim to be a cornerstone in the enhancement of the productivity. OmpSs is a programming model developed at the Barcelona Supercomputing Center, built on the top of the Mercurium compiler and the Nanos++ runtime library, which aims to exploit task level parallelism and heterogeneous architectures. This model covers many productivity aspects such as the programmability, defining easy directives that can be integrated in sequential codes avoiding the need of restructuring the originals to get parallelism, and the performance, allowing the use of these directives to give support to multiple architectures and support for asynchronous parallelism. Nonetheless, not only the convenient design of a programming model and the use of a powerful architecture can help in the achievement of good productivity.Compilers are crucial in the communication between these two components in computers. They are meant to exploit both the underlying architectures and the programmers codes. In order to do that, analysis and optimizations are the techniques that can procure better transformations. Therefore, we have focused our work in the enhancement of the productivity of OmpSs by means of implementing a set of high level analysis and optimizations in the Mercurium compiler. They address two directions: obtain better performance by improving the code generation and improve the programmability of the programming model relieving the programmer of some tedious and error-prone tasks. Since Mercurium is a source-to-source compiler, we have applied these analyses in a high level representation and they are important because they are architecture independent and, thereupon, they can be useful for any target device in the back-end transformations.
SubjectsSoftware engineering, Compilers (Computer programs), Enginyeria de programari, Compiladors (Programes d'ordinador)
DegreeMÀSTER UNIVERSITARI EN ARQUITECTURA DE COMPUTADORS, XARXES I SISTEMES (Pla 2009)
URIhttp://hdl.handle.net/2099.1/25839
Collections
Share: