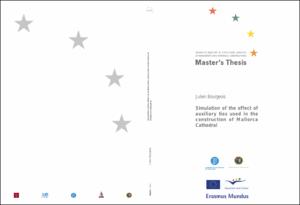 Document typeMaster thesis
Rights accessOpen Access
Abstract
The thesis is oriented on the study of Mallorca Cathedral taking into account its construction process and, particularly, the influence of iron ties used as auxiliary devices during the construction. Some previous studies (Roca et al., 2013, 2012) have presented some possible hypotheses about the construction process of this gothic cathedral. This study complements the previous results by considering the possibility of the adoption of auxiliary ties, since some evidences of their application can be recognized in the structure nowadays. Before focusing on Mallorca Cathedral, a first part is devoted to the effective use of iron elements during medieval times with a special interest on temporary and long-lasting ties in gothic architecture. The main goal of this research is to show the widespread adoption of iron in gothic constructions. Then, a thorough investigation of the bays of Mallorca Cathedral has been carried out in order to estimate the location of the temporary ties. It is assumed that such ties were adopted to stabilize the lateral vaults before the construction of the central ones, and were cut afterwards. After this preliminary work, three different ties configurations are considered (upper tie, lower tie and two ties) together with a reference configuration without any tie. The ties were added to an existing model of a typical bay of the cathedral. The four models developed are used to study the role of the ties during the construction and the effects resulting from being later cut. The study also includes the analysis of the long-term deformation of the structure taking into account the effects resulting from the removal of the ties, as well as parametric analyses: one focused on the influence of the section of the ties and another one on the influence of the tensile strength of the masonry.
SubjectsStructural analysis (Engineering), Catedral de Mallorca, Estructures, Teoria de les
URIhttp://hdl.handle.net/2099.1/25714
Collections
Share: