Development and implementation of a tensegrity-based formation controller 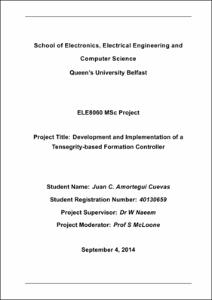 Show full item record
Amortegui Cuevas, Juan Camilo
Tutor / directorNaeem, Wasif
CovenanteeQueen's University of Belfast
Document typeBachelor thesis
Rights accessOpen Access
Abstract
The formation control or cooperative work of multiple unmanned vehicles has proved to be more effective in terms of time consumption and overall performance in a wide variety of applications. This project aims to review some of the research which has been done up to date and in the subsequent chapters a tensegrity-based formation controller is developed and implemented to assess its global behaviour. This development starts with the design of the heading angle control of a vessel based on the first order Nomoto model which is later transformed into a waypoint problem. Later on, a globally decentralised formation topology and the tensegrity concept is introduced in the context of formation control where a sliding mode controller, a linear-quadratic regulator servo controller and a conventional proportional-integral-derivative controller are designed and simulated to regulate the elongation of a virtual spring-mass-damper system which connects two vehicles. This is done by applying a force to this system which, from the point of view of the reference vehicle, can be regarded as a repelling force if the formation distance is smaller than the reference and attracting otherwise. The results obtained are satisfactory proving stability and feasibility of the proposed strategy and the limitations and drawbacks of each control technique used are described. However, it is observed that the LQR servo controller yields a better balance between performance and robustness. Afterwards, the tensegrity concept is implemented on a leader-light-guided-follower formation topology using the LEGO® Mindstorms NXT platform. The distance keeping evolution between the follower and the leader is assessed positively for both cases, a PID and LQR servo controller, however, this latter with better tracking while the leader is moving.
SubjectsVehicles -- Automatic control, Tensegrity (Engineering), Electronic controllers, Vehicles -- Control automàtic, Tensegritat (Enginyeria), Controladors electrònics
URIhttp://hdl.handle.net/2099.1/25554
Collections
Share: