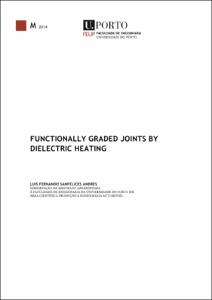 The most traditional methods of fastening such as bolts or rivets have been used for decades. However, these cause stress concentrations and premature failure in materials, while adhesive bonds spread the load more evenly over the surface, facilitating a lighter and cheaper overall structure. That is the main reason why adhesively bonded joints are increasingly used in aerospace and automotive industries. The single lap joint (SLJ) with metallic or composite flat plates is the most common mainly due to its simplicity and efficiency. However, one major drawback associated to this joint is the occurrence of shear and peel stress concentrations at the end of the adhesive layer. This leads to joint premature failures at the ends of the overlap. The main objective of the present project is to use an adhesive functionally modified and cured by dielectric heating. This allows a more uniform stress distribution along the overlap and would permit to work with much smaller areas, reducing considerably the weight of the structure and give more reliable joints. In the present project two ways to obtain graded joints were tested. The first way was to obtain a graded cure of the adhesive using different local concentrations of microwave absorbing particles (carbon black) along the overlap. The particles interact with the magnetic field and heat the adhesive. The second way was to use the carbon black to reinforce the adhesive and obtain graded mechanical properties along the overlap and cure isothermally by dielectric heating. Then, a preliminary experimentation was done in order to determine the viability of main objectives. The results proved the impossibility to perform a graded joint by a graded cure of the adhesive. This is due to several factors such as the conductivity of the adherends or the non uniformity of the magnetic field. Therefore, the second methodology proposed to achieve a graded joint was followed. The effect of carbon black in the adhesive properties was studied and graded joints were manufactured and tested. Finally, the results obtained were discussed and analyzed. Bulk tensile tests showed an improvement of the ductility as function of carbon black concentrations. Thus, graded SLJs were manufactured using a high local concentration of carbon black at the end of the overlap. This made the adhesive more ductile and a higher joint strength was obtained due to the lower stress concentrations. Also, a failure prediction was done. For graded joints the analytical model used gave accurate predictions. However, for the joints with uniform properties the predictions were too much different and several hypotheses were proposed to explain this.
SubjectsAdhesive joints, Dielectric heating, Unions adhesives, Escalfament dielèctric
URIhttp://hdl.handle.net/2099.1/25211