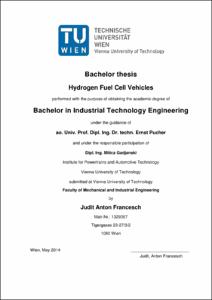 Hydrogen fuel cell vehicles are meant to be the alternative for all these cars on the road - more than one billion. Why now? Mankind are realizing the importance of the environment and this new technology avoid the noise and the emissions of pollutants. How it works? A reaction between hydrogen and oxygen in the fuel cell generate the power for the vehicle with water as the only residue. Thus, no fossil fuel dependence? These vehicles use hydrogen as an energy source, and it is possible to produce hydrogen without fossil fuel. What about the infrastructure? Automakers, governments, and oil and energy companies are working together on it. Although it requires a lot of investment, nowadays, more than 180 hydrogen refuelling stations are underway and hundreds more are planned. Automakers are pushing to increase the amount of it, because they intend the launching of these vehicles in a short-term. Hydrogen fuel cell vehicles are the present with a great future.
SubjectsHybrid electric vehicles, Hydrogen as fuel, Fuel cells, Vehicles elèctrics híbrids, Hidrogen com a combustible, Piles de combustible
URIhttp://hdl.handle.net/2099.1/24995