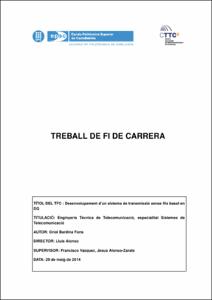 Document typeMaster thesis (pre-Bologna period)
Rights accessOpen Access
Abstract
DQ is a high performance access protocol for wireless communications networks which reaches collision-free data transmissions by gathering the random access requests in a small time window and completely avoiding the collision of data packets. This protocol operates by using two logical distributed queues, which manage the resolution of collisions and the data transmission scheduling in parallel. The protocol achieves near-optimum performance at the link level independently of the number of devices in the network, thus making it appealing for the Internet of Things (IoT) as well as for highly-dense network deployments. This project aims to implement the DQ-protocol on Semtech DK7A433 test boards, oper- ating at 300-500 MHz, which are able to switch between FSK and OOK modulation. In order to manage the board initialization, and perform the protocol implementation, a new firmware has been created, coded in C programming language, which is based on interruptions generated by the RF transceiver over the main processor cortex M-3. Two of the key elements for the DQ system are the transmission and detection of ARS; in particular the collision detection that can occur in any of the access time mini slots is one of the main challenges to be faced when implementing this protocol in real hardware. Trans- mission and collision detection of ARS has been carried out and experimentally tested within the scope of this project, using the different available RF configurations. The worst case for collision detection has been considered using one central node and two slaves transmitting simultaneously. This case has the maximum probability of not detecting a collision and being affected by the capture effect. The tests carried out have proven that FSK modulation is not adequate for ARS trans- mission due to its strong sensitivity to the capture effect, while OOK modulation fits much better our goals at the cost of a slower transmission rate, and a shorter range. The results presented in this project constitute the foundations for the implementation of a first prototype of a wireless transmission system using DQ ever.
SubjectsXarxes de comunicacions
URIhttp://hdl.handle.net/2099.1/24963
Collections
Share: