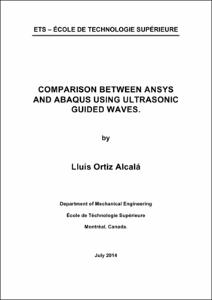 hotmail.com
Tutor / directorBelanger, Pierre
CovenanteeUniversité de Québec. École de technologie supérieure
Document typeBachelor thesis
Rights accessOpen Access
Abstract
The detection of corrosion in pipelines is an aspect of utmost importance as far as the fluid transportation industry is concerned, and especially if they have a difficult access. As they are installed outdoors or underground, these kilometric conduits are under various weather and natural phenomena, which may damage them causing loses and consequently serious natural disasters. Over the years, the most common way to check the pipelines’ thickness has been thanks to ultrasonic and Foucault currents. The constraint of these techniques is that they only allow examining the thickness just under the probe. Thus, the checking procedure along its entire length becomes a very dull and long process. The problem arises when the access to certain stretches of those pipelines becomes extremely complex, making this control impossible. Upon needing to inspect these pipelines in a precise, quickly and easy way along their length, this control method is rarely used any more. Low frequency guided waves are beginning to be used frequently to perform this task since their detection and location capability of corroded patches is very good. The only drawback that this screening technique presents is that it only gives a rough estimate of the remaining wall thickness. Currently, guided waves are the most powerful method not only to detect inaccessible corroded patches but also to map their remaining thickness precisely. Nowadays, the world of computer science is so immensely vast that there is a large amount of software solutions to perform the same task. The problem ascends when a user needs to complete a specific job and does not know which of the programs at his disposal to choose. Some of the aspects that will prevail in his decision is if the software’s interface is good-looking, the price of software’s license, the memory consumption at the time of performing a task but mainly the time taken to complete the work. The aim of this report is to compare two of the most important programs for finite elements simulations: Abaqus and ANSYS. This analysis was done by applying a signal of 50 kHz and 10 cycles, involved in a Hanning window in a titanium plate of 1 m long and with a thickness of 5 mm. The reason why this study was done by simulating a plate instead of a pipeline, without forgetting the aforementioned, is because it was needed to simulate an easy geometry in order to shorten the time taken to solve the simulation by both software solutions. The conclusions of this work were obtained by analysing which of the software solutions offered the most accurate displacements of a node located one meter far from where the signal was implemented. In case that both were equally precise, what was determinant for us at the time of choosing the best software program was which of both took the highest analysis speed, less time and memory consumption to perform the task.
SubjectsPipelines -- Maintenance and repair -- Computer simulation, Ultrasonic testing, ANSYS (Computer system, Abaqus (Electronic resource), Canonades -- Manteniment i reparació -- Simulació per ordinador, Ultrasons -- Proves, ANSYS (Sistema informàtic), ABAQUS (programes d'ordinadors)
URIhttp://hdl.handle.net/2099.1/24953
Collections
Share: