Is secular stagnation the new reality for the first world? A comparison of developed economies 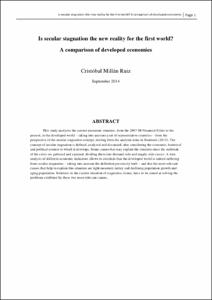 Document typeBachelor thesis
Rights accessOpen Access
Abstract
This study analyzes the current economic situation, from the 2007-08 Financial Crisis to the present, in the developed world – taking into account a set of representative countries – from the perspective of the secular stagnation concept, starting from the analysis done in Summers (2013). The concept of secular stagnation is defined, analyzed and discussed, also considering the economic, historical and political context in which it develops. Some causes that may explain the situation since the outbreak of the crisis are gathered and exposed, dividing them into demand-side and supply-side causes. A data analysis of different economic indicators allows to conclude that the developed world is indeed suffering from secular stagnation – taking into account the definition previously built – and that the most relevant causes that help to explain this situation are tight monetary policy and declining population growth and aging population. Solutions to the current situation of stagnation, hence, have to be aimed at solving the problems exhibited by these two most relevant causes.
SubjectsDepressions, Economics, Crisis econòmiques, Economia
DegreeGRAU EN ENGINYERIA EN TECNOLOGIES INDUSTRIALS (Pla 2010)
URIhttp://hdl.handle.net/2099.1/24930
Collections
Share: