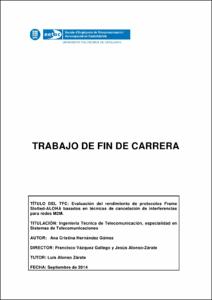 Document typeBachelor thesis
Rights accessOpen Access
Abstract
Performance Evaluation of Frame Slotted-ALOHA protocols based on interference cancellation techniques for M2M networks. Since the technologies related to the Internet of Things (IoT) have spread across the world, M2M networks have become more popular. M2M networks allow devices to communicate between each other remotely and without human intervention, through wired or wireless communication channels. These devices have three basic functions: collect, store and transmit information. M2M communications is not different from any other communication process. The devices involved in the transmission form what is called a M2M area network, which is connected to the communication network through the gateway. The gateway manages the data packets and sends the information to a final server, where it subsequently reaches the M2M applications and the end-user. In this project we considered a M2M network used for data collection. It is composed of several devices that send their data packets to the gateway periodically and under request. Once one device has succeed it switches into a low-power mode. Due to the fact that M2M networks include lots of devices, efficiency and protocols optimization are required in order to guarantee low energy consumption and avoiding delays in data transmission. As a first approach, protocols based in ALOHA offer low complexity and easy implementation. However, its performance decreases drastically when the data-traffic-load increases or with a large number of devices. Lots of protocols based in ALOHA have been developed in the search for energy efficiency, such as Slotted-ALOHA (SA) or Frame Slotted-ALOHA (FSA). Previous works evaluated the performance of the Successive Interference Cancellation (SIC) techniques on FSA. In these protocols, the devices send a copy of its data packets in different time slots. Each copy includes the reference to the slots in which the remaining replicas were transmitted. In order to decode data packets, the gateway identifies the slots free of collisions. With the decoded packets, it is able to solve the collisions in other slots where this packet has been sent. This process is known as Successive Interference Cancellation. In this work we evaluate the performance of Intra-frame SIC and Inter-frame SIC. Intra-frame SIC uses the decoded data packets to solve collisions inside a transmission frame. On the other hand, Inter-frame SIC performs the interference cancellation outside the current frame, i.e, packets decoded in current frame are used to solve collisions from past frames, which have been previously stored by the coordinator. In addition, we study the effect of Diversity in FSA, by evaluating some probability density functions (PDF) in the selection of the number of replicas. Therefore, the devices could select a fixed number of replicas or a random number of replicas with uniform PDF or irregular PDF. By means of simulation codes developed in Matlab we evaluate delay and energy consumption using Intra-frame and Inter-frame SIC-FSA. The results were compared against FSA protocol. It was proved that Intra-frame SIC-FSA can reduce average delay and the coordinator's energy consumption in 78%, while Inter-frame SIC-FSA reaches 94% of reduction in delay and energy consumed by the coordinator. In addition, the average energy consumption per device can be reduced by around 18% by using Intra-frame SIC-FSA, while Inter-frame SIC-FSA outperforms FSA protocol by decreasing the energy of the devices in 22%.
SubjectsComputer network protocols, Protocols de xarxes d'ordinadors
DegreeGRAU EN ENGINYERIA DE SISTEMES DE TELECOMUNICACIÓ (Pla 2009)
URIhttp://hdl.handle.net/2099.1/24749
Collections
Share: