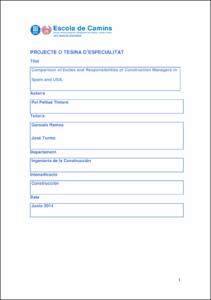 Except where otherwise noted, content on this work is licensed under a Creative Commons license : Attribution-NonCommercial-NoDerivs 3.0 Spain
Abstract
Construction management is the art of managing a co nstruction project as efficiently as possible. However, it is well known, that the posit ion of the construction manager might have some differences in the role they play dependi ng on the country in which one is located. In 2007, a study was conducted at Illinois Institut e of Technology in Chicago, whose objective was to collect information from the many parties involved in the construction process in order to record and compare their expect ations relative to the duties of construction managers in the US. In order to do tha t, they designed a questionnaire, and this questionnaire was sent to the different partie s. With the data collected, they were able to see the differences in the expectations and define the duties of construction managers according to the majority. In the wake of the 2007 investigation, another inve stigation was conducted in 2014. Two Universities in two different countries, United States and Spain, have run the research. The universities are the Illinois Institu te of Technology (IIT) in Chicago and the Polytechnic University of Catalonia (UPC) in Ba rcelona. The objective of the study was to undertake the same investigation conducted i n the United States in 2007 but this time in Spain. The questionnaire was adapted to Spa nish conditions and translated into Spanish. It was then sent to the construction manag ers in Spain. With the data collected, the expectations regarding the duties of constructi on managers in Spain were defined and a comparison between the two countries was made. When comparing two countries from two different con tinents, culture is an important factor to consider. Therefore, a cultural compariso n between the two countries was also made using Hofstede’s dimensions. In order to analyze the collected data in the Spani sh questionnaire in 2014 and the retrieved data from 2007, The Mann-Whitney U test ( non-parametric statistical analysis) was performed. Moreover, the cultural dif ferences between the countries were also taken into account. All in all, the findings suggested that there are d ifferences regarding the responsibilities between Spanish and American CMs. Most of the disag reements are related to CM duties performed in the design and pre-design phase of projects. On the other hand, fewer disagreements were observed in the duties per formed in the construction phase. In both countries the average respondent considered to be of priority those duties that CMs perform in the construction phase and of least relevance those that are performed in the design and pre-design phases.
SubjectsProject management, Gestió de projectes
DegreeENGINYERIA DE CAMINS, CANALS I PORTS (Pla 1995)
URIhttp://hdl.handle.net/2099.1/24716
Collections
Share: