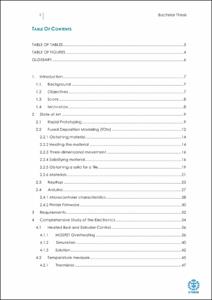 Document typeBachelor thesis
Rights accessOpen Access
Abstract
Nowadays, RepRap and Arduino communities have had an increasing progress. These terms are demarcated on the Open Source development model; the designs produced by these projects are released under the GNU General Public License, which promotes free universal access and distribution of it, allowing an exponential and rapid improvement. RepRap project uses Fused Additive manufacturing (FDM) technology, term used to refer to processes that make solid objects from 3D computer models. In particular, the object is created by printing thin layers of fused plastic on top of one another. The objectives of this philosophy are the creation of 3D printers which are capable of self-replicating and use an Open Source software for everyone. Currently, printer’s control is realized by two printed circuit boards (PCB); one board is a microcontroller (Arduino) and the other contains the power electronics. As regards of Arduino, it is an electronic platform whose purpose is having an easy-to-use hardware and software. This platform permits reading its surroundings by receiving inputs from sensors and modifying it by actuators such as motors and lights. Therefore, this thesis consists on the design of a PCB for control a RepRap printer in order to contribute to the improvement of these philosophies.
SubjectsThree-dimensional printing, Printers (Data processing systems) -- Design and construction, Impressió tridimensional, Impressores (Ordinadors) -- Disseny i construcció
DegreeGRAU EN ENGINYERIA EN TECNOLOGIES INDUSTRIALS (Pla 2010)
URIhttp://hdl.handle.net/2099.1/24670
Collections
Share: