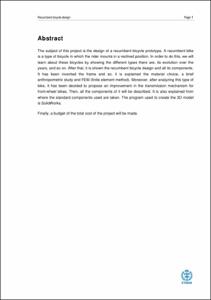 Document typeBachelor thesis
Rights accessOpen Access
Abstract
The subject of this project is the design of a recumbent bicycle prototype. A recumbent bike is a type of bicycle in which the rider mounts in a reclined position. In order to do this, we will learn about these bicycles by showing the different types there are, its evolution over the years, and so on. After that, it is shown the recumbent bicycle design and all its components. It has been invented the frame and so, it is explained the material choice, a brief anthropometric study and FEM (finite element method). Moreover, after analyzing this type of bike, it has been decided to propose an improvement in the transmission mechanism for front-wheel bikes. Then, all the components of it will be described. It is also explained from where the standard components used are taken. The program used to create the 3D model is SolidWorks. Finally, a budget of the total cost of the project will be made.
SubjectsBicycles -- Design and construction, Bicicletes -- Disseny
ProvenanceAquest document conté originàriament altre material i/o programari no inclòs en aquest lloc web
DegreeGRAU EN ENGINYERIA EN TECNOLOGIES INDUSTRIALS (Pla 2010)
URIhttp://hdl.handle.net/2099.1/24669
Collections
Share: