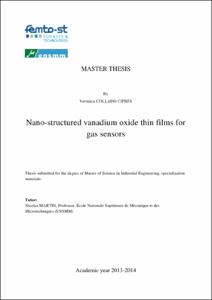 Tutor / director / evaluatorMartin, Nicolas
Document typeBachelor thesis
Rights accessOpen Access
Abstract
Vanadium thin films are prepared by DC magnetron sputtering using the GLancing Angle Deposition (GLAD) method. This technique will allow the growth of porous nano-structures with inclined columns, as well as zig-zags and spirals. Also pulses of oxygen combined with GLAD will be used during sputtering to study the properties of the films. All films are oxidized after being heated for several temperature cycles, taking the forms of V2O5 and VOX compositions. The aim of this work is to characterize coatings containing primarily the VO2 phase; given this phase has a reversible semi-conductor to metal transition close to room temperature (Approximately 68º). Due to this behaviour, VO2 becomes useful in sensor applications, especially with gases. The best operating conditions to favour the formation of VO2 and its most significant metal-to-semiconductor transition will be examined. The column angle β is measured by scanning electron microscopy (SEM) and the electrical conductivity of the films exhibiting inclined columns, zig-zags and spirals nano-structures as well as the films sputtered with oxygen pulses is investigated with DC-resistivity measurements. It is found that the column angle β must reach a threshold value to significantly reduce the electrical conductivity of the vanadium thin films close to one order of magnitude. The most suitable nano-structures for gas sensor applications found were: Inclined columns of incidence angle α=85º annealed to 550ºC and inclined columns of incidence angle α=85º with oxygen pulses during deposition with a period of 16 seconds and duty cycles dc=0,124 and dc=0,375, with annealing treatments to 550ºC and 500ºC respectively. The film with dc=0,375 annealed to 550ºC was tested for ozone sensing. The optimum working temperature found was of 370ºC degrees, with a maximum variation of resistivity in front of time of 0,05534 Ω/s.
SubjectsChemical detectors, Vanadium -- Environmental aspects, Thin films, Nanostructures, Sensors químics, Vanadi -- Aspectes ambientals, Pel·lícules fines, Nanoestructures
URIhttp://hdl.handle.net/2099.1/24473
Collections
Share: