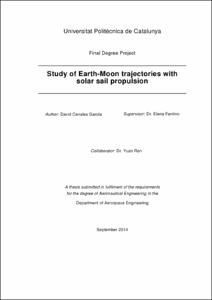 Except where otherwise noted, content on this work is licensed under a Creative Commons license : Attribution-NonCommercial-NoDerivs 3.0 Spain
Abstract
The computation of Earth-to-Moon trajectories constitutes an important and interesting chapter of spacecraft trajectory design. The traditional techniques based on Hohmann maneuvers and patched conics allowed the fast transfer of the Apollo’s to our natural satellite in less than four days, and proved to be the only option for manned missions. However, we are now in an epoch in which robotic missions dominate the exploration of our planetary system and in particular in a historical and economical moment in which in many situations "cost-efficient" is preferred to "time-efficient". Many alternative solutions to the Earth-to-Moon transfer problem have been proposed based on dynamical models and assumptions that imply long flight times: it is the case, for example, of the low-energy transfers in the circular restricted three-body problem, where the gravitational influence of the Sun is taken into account by letting the s/c travel as far as the equilibrium points of the Sun-Earth system before flying back to the Earth-Moon system and getting captured by the gravity field of the Moon. In this work we investigate the design of Earth-to-Moon trajectories propelled by the action of solar radiation pressure on a sail. Solar sails have been demonstrated in orbit and are undergoing such a rapid technological development that they are being applied also to the class of nanosatellites with off-the-shelf hardware components. We formulate the trajectory design problem as an optimal control problem. Optimal control is based on the theory of calculus of variations and on the Pontryagin minimum principle. It is an indirect optimization method whose formulation is especially suitable to problems where a control is present (in this case the acceleration produced by the momentum exchange between the solar radiation and the sail), and a cost function (such as the transfer time) is to be minimized in the presence of end-point constraints (such as the conditions for capture at the Moon). Therefore, this work shows how to solve an Earth-to-Moon trajectory with solar sail propulsion applying the optimal control theory
SubjectsTrajectory optimization, Space flight to the moon, Solar sails, Nonlinear programming, Sistemes de propulsió, Energia solar -- Aplicacions, Vol espacial, Programació no lineal
DegreeENGINYERIA AERONÀUTICA (Pla 2004)
URIhttp://hdl.handle.net/2099.1/24446
Collections
Share: