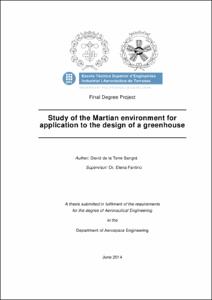 Document typeMaster thesis (pre-Bologna period)
Rights accessOpen Access
Abstract
The human exploration of Mars belongs to the current plans of NASA and ESA. Getting the astronauts to Mars and returning them safely to Earth imposes several engineering challenges. In particular, creating the conditions for living on the Martian surface requires in the first place a thorough understanding of the Martian environment. Installing a manned base would require the implementation of life support systems including the appropriate means to provide food to the astronauts. The word “appropriate” in this context suggests the idea of “plant cultivation”. This study is a reconstruction of the environment and climate of Mars. It develops through a review of the observation and in-situ data collected over 50 years of study and exploration. The review is followed by the study, understanding, revision and implementation of the models based on such data and on the physics of the main processes that affect the environment and the climate. The final objective is to provide a solid basis for selecting one or more candidate sites for the installation and operation of a greenhouse. Such candidates should undergo further analyses concerning the geological and engineering issues inherent to the realization of such an ambitious project. These analyses are out of the scope of this work, which focuses on the physics of the environment and the climate of the red planet. It should also be noted that the implications of this project go much beyond the specific proposed application because they have a clear scientific value and an intrinsic originality. As a matter of fact, this work has implied collecting, understanding, organizing and elaborating data and models which are often heterogeneous and dispersed. The result is the first global model of the Martian environment. As such, this study can be of considerable help in the feasibility studies of future missions to Mars, be them manned or robotic.
SubjectsMars (Planet)--Climate, Computer simulation, Greenhouses--Climate, Mart (Planeta), Medi ambient -- Simulació per ordinador, Climatologia -- Mètodes de simulació, Hivernacles -- Construcció
URIhttp://hdl.handle.net/2099.1/24437
Collections
Share: