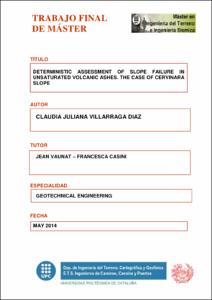 Document typeMaster thesis
Rights accessOpen Access
Abstract
This thesis deals with the assessment of the failure mechanism of a shallow landslide triggered by rainfall in a slope of unsaturated volcanic ashes, located at Cervinara, Italy. The region of Campania (Southern of Italy) had suffered in several occasions the consequences of this type of landslides. They have caused casualties, especially in the municipality of Cervinara. Additionally the quick growing of population in this region leads that to an increasing number of people exposed to a considerable risk. For this reason, in the last years, research efforts have been made to define effective alarm system. But, in order to define adequately an alarm system is necessary that the failure mechanism of this landslides be completely understood. This is why, in 2009 an instrumentation system was installed in a slope close to Cervinara to register the evolution of liquid pressure and water content within the slope. This monitoring system is still functional. Additionally a new test was developed in order to obtain information about the rainfall induced failure process. This test consists in a highly instrumented mock-up subjected to a specific rainfall intensity until failure One of the sessions of the last Italian Workshop of landslides (October 2013) was dedicated to the hydrological modelling of landslides, through a benchmark exercise named Round Robin test. This exercise was focus in three analysis scales: laboratory test, mock-up test (flume test) and real case. The benchmark considered two principal stages: back-analysis and prediction. For the back analysis phase the information provided consisted in different laboratory test, the characteristics and results of two different flume test, and the response of the monitoring station for the first seven months of 2011, as well as, the meteorological information for this months. Finally, the participants should simulate the response of an infiltration flume test with specific characteristics and the response to the real slope for an assigned record of precipitations and temperature. To realized property this predictions, not just to define adequately the model (Geometry, boundary conditions and coupling) is important, The selection of the parameters that represent better the behaviour observed is crucial, in especial the hydraulic characteristics. Which are the most complex when dealing with unsaturated soils. In this thesis special attention is paid to the determination of the water retention curve.
SubjectsLandslides, Esllavissades
DegreeMÀSTER UNIVERSITARI EN ENGINYERIA DEL TERRENY I ENGINYERIA SÍSMICA (Pla 2009)
URIhttp://hdl.handle.net/2099.1/24355
Collections
Share: