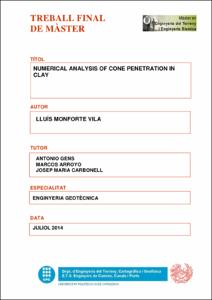 Document typeMaster thesis
Rights accessOpen Access
Abstract
This work addresses the deep penetration of structures in clays; particularly the Cone penetration test. CPT is one of the most widely used in situ method to characterize soil properties. A large number of correlations have been obtained using a multitude of techniques; however, there is still a large spread between the proposals. The research has been carried out by large deformation calculations employing the Particle Finite Element method. In this method, the domain is discretized with a set of particles; the interaction between them is computed in a nite element mesh with low order elements and a lagrangian description of the domain. This mesh is created frequently; adaptive remeshing strategies and techniques to recover the boundary are used. In this work, an explicit integration scheme for hyperelastic-based nite strains elasto-plasticity is proposed. One step update equations are obtained from the large deformation multiplicative elasto-plasticity theory, where an exponential variation of the plastic deformation gradient is assumed. In addition, the material tangent matrix is presented and has the same formal structure as the usual small strains elastoplastic tangent matrix. Routines to alleviate the main drawbacks of explicit methods are outlined, suh as a yield drift correction scheme and an adaptive substepping method. Several examples of typical geotechnical tests are presented, showing the robustness and accuracy of the proposal. Results of the simulation of the cone penetration in undrained clay are reported. A parametric study in total stresses is carried out for materials obeying a Tresca yield criterion. The variables investigated are the rigidity index and the roughness at the interface of the soil and the structure. Details on the stress state and the incremental displacements pro les are presented. Finally, the drained penetration on soils obeing a Modi ed Cam Clay model elasto-plastic behavior is assessed and the stress state and the stress path are commented.
SubjectsSoil mechanics, Mecànica dels sòls
DegreeMÀSTER UNIVERSITARI EN ENGINYERIA DEL TERRENY I ENGINYERIA SÍSMICA (Pla 2009)
URIhttp://hdl.handle.net/2099.1/24353
Collections
Share: