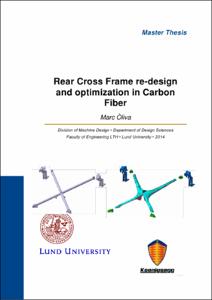 Except where otherwise noted, content on this work is licensed under a Creative Commons license : Attribution-NonCommercial-NoDerivs 3.0 Spain
Abstract
This master thesis covers the process followed in the re-design and optimization of a structural part in a supercar. The part reviewed is the Rear Cross Frame currently in production of all Koenigsegg’s supercars. In the new revision of the part, the material is Carbon Fiber. The version currently in production is made of steel. The shape has been modified to fit the Carbon Fiber manufacturing requirements and to fulfill better the load conditions to which the part will be subjected. The Carbon Fiber lay-up has been optimized, to achieve the lightest possible result and retain the same stiffness levels as the current Rear Cross Frame. The first step in the process has been the detection of the points to improve with respect to the old part. The achievement of a good tradeoff between stiffness improvement and weight reduction has been then set as a goal, as well as a visually appealing part. In this stage the parts involved at any phase of the whole thesis process are introduced to be familiarized with their names. After that, a package of the area and the design space for the new part has been created. This design spaces take all the available space to define the volume boundaries of the new rear cross frame. A simplified version of the structural parts in the zone of the rear cross frame is as well conceived. With the design space and the simplified structural geometry a topology optimization has been performed. The adequate load cases have been introduced, representing different driving situations. With the output of the topology optimization some decisions have been taken in order to define some aspects that the final part will include. Using the topology optimization results as a guideline, the final CAD model has been created. In this step, manufacturing constraints for carbon fiber parts such as de-molding angles have been kept in mind. Once the final CAD model has been finished a CAE analysis has been performed. This analysis consists in the optimization of the carbon fiber lay-up for the model. The composite plies have been defined in shape, direction and material in order to better fulfill the objectives and Koenigsegg’s carbon fiber part standards. Once the general lay-up has been defined, the mounting areas have been revised. The general approach includes aluminum inserts in the carbon fiber part. These inserts offer good connection and bolting surfaces as well as a nice load propagation to the carbon fiber. The connection with the Rollover Bar Bracket has been re-designed, as well as the Rollover Bar Bracket itself, to achieve a lighter and mounting-friendlier solution. In the next phase the molds and masters needed to produce the part have been designed. In addition, the steps to generate the molds and final parts have been detailed and has been indicated how to glue the different elements together. The thesis results present the final part offering the same stiffness, being lighter and better looking that the part currently in production but less cost efficient. At the moment of the thesis publication, the solution hasn’t been implemented in the cars.
SubjectsSports cars -- Design and construction, Carbon fibers -- Testing, Automòbils esportius -- Projectes i construcció, Fibres de carboni -- Proves
URIhttp://hdl.handle.net/2099.1/24276
Collections
Share: