Research on the relationship between urban expansion and migration of Shagnhai 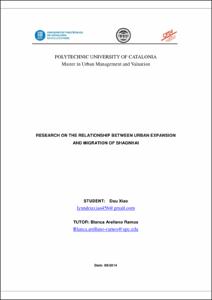 Document typeMaster thesis
Rights accessOpen Access
Abstract
Under the background of global economy, urban growth considering the city center as basic development point has expanded all around the world, small cities began to expand outside as big cities and metropolitans. At the same time, population migration has become more and more popular. People try to move to other regions for jobs and opportunities. Sustainable, high-speed, ultra-conventional development of the social economy accelerated China's urbanization, most of Chinese cities witnessed rapid development period with the characteristic of urban expansion and population migration. These gradually increased built-up areas offered spaces for population and the development of industries and offices. In turn, growth of the population and social economy promoted the extension of the city areas, and migration has become the most important factor for population growth. As a result, we can put forward the hypothesis that population migration is essential for urban expansion, and vice versa, they are in close contact with each other. The main purpose of this article is taking Shanghai for example to investigate the inside relationship between population migration and urban expansion in order to determine the right way for urban development and try to find out some ideas and suggestions for strengthening the managements of floating population and help the governments for better population policies. These can help to master the substance for the city development and lay the function for the harmonious development of cities and population. In this thesis, I summarized and generalized the theories and models of population migration and urban expansion as well as some articles relating to the connections between them to get extended models and theories. In order to analyze their relationships, it is better to understand historical evolution of migration and expansion process of Shanghai first. Shanghai has experienced tortuous processes of urban expansion since 1949. Generally, Shanghai can be counted as a in-migrated city, and based on the same social backgrounds and urban development policies as urban expansion, the migration of Shanghai can be divided into several periods: the fluctuated twenty years, abnormal period with lower level of migratory activity and a dominance of outmigration and prosperous development. Using the theories and models before to research qualitatively and quantitatively on their relationships and connections, it is helpful in determining rational size for the urban expansion for a city and making policies and managements for the population migration which can feedback for the promotion of the development of the theories and models.
SubjectsCities and towns -- China -- Shanghai -- Growth, Sociology, Urban -- China -- Shanghai, Desenvolupament urbà -- Xina -- Xangai, Sociologia urbana -- Xina -- Xangai
Location
1: 200 Ren Min Da Dao, RenMin GuangChang, Huangpu Qu, Shanghai Shi, Xina, 200000
URIhttp://hdl.handle.net/2099.1/24254
Collections
Share: