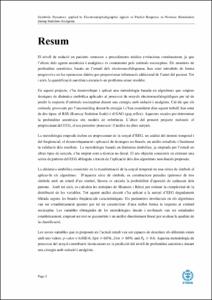 Document typeMaster thesis (pre-Bologna period)
Rights accessOpen Access
Abstract
The level of sedation in patients undergoing medical procedures evolves continuously since the effect of the anesthetic and analgesic agents is counteracted by noxious stimuli. The monitors of depth of anesthesia, based on the analysis of the electroencephalogram (EEG), have been progressively introduced into the daily practice to provide additional information about the state of the patient. However, the quantification of analgesia still remains an open problem. In this project, a methodology based on non-linear techniques signal processing algorithms was developed and applied to the electroencephalogram (EEG) for predicting responses to noxious stimulation during Sedation-Analgesia. Two types of stimuli were performed by the anesthesiologist during the surgery sessions, RSS (Ramsay Sedation Scale) and GAG (gag reflex). These sedation scales are considered gold standard. In this work, the scope of the project includes: EEG preprocessing, processing and analysis of the mentioned signals. The methodology included an EEG signal preprocessing, a time-domain and frequency-domain analysis, the development and application of non-linear techniques, a statistical analysis and finally the validation of the results. Symbolic dynamics methodology, already applied to other kind of signals, was used as a non-linear technique. The aim was to extract a set of patterns from the EEG obtained through two proposed non-linear algorithms. The symbolic dynamics consists of the transformation of the time signal in a series of symbols by an algorithm. From these new series, words of three symbols were constructed with one symbol delay and their occurrence probability was evaluated in the signals variables. Base on this, the Shannon and Rényi entropies were applied to estimate the complexity of the distribution of the variables. Moreover, thresholds on probabilities were used to construct new variables. The analysis was applied to the EEG filtered according to the characteristic frequency bands (EEG rhythms). The parameters involved in the algorithms were statistically adjusted in order to better characterize the nociceptive response. Variables obtained from linear and non-linear methodologies were submitted to a statistical analysis using a nonparametric test and a linear discriminant analyses to assess the quality of the classification. The leaving-one-out method was used as validation criteria. New defined variables were able to describe the different states with p-value < 6.88E-6, Spe > 60%, Sen > 60% and Pk > 0,6. This signal processing methodology technically contributes to the prediction of anesthesia depth level during Sedation-Analgesia.
SubjectsElectroencephalography, Signal processing -- Computer simulation, Algorithms, Electroencefalografia, Tractament del senyal -- Simulació per ordinador, Algorismes
URIhttp://hdl.handle.net/2099.1/24226
Collections
Share: