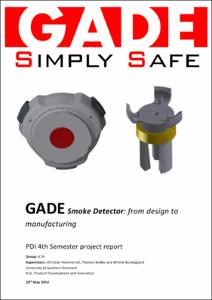 The goal of this project is to take Keld Gade’s idea of a new fire detection system and finalizing it for the market and production. This involves going through 3 stages of a defined stage gate model: Design, Market Penetration and Production Engineering. This is done as part of the Semester project at the Product Development and Innovation educations 4th semester. The group worked as if it was a start-up company. The original invention by Keld Gade consists of a detector unit, a main hub and a dismounting tool. The detector unit’s signals the main hub when fire is detected. The main hub will then warn via the Internet, mobile and sound. The dismounting tool is used to easily take down and putting up the detector units. The market was investigated and the targeted market defined as elderly and small businesses. Denmark has the lowest number of smoke detectors in the Northern countries and especially the elderly are lack-ing behind. Further the dismounting tool could be very beneficial for this group. The main values for the customers were defined as: Time it takes to change battery, color/shape, unit cost, time it takes to install. Based on the company situation, the market, manufacturing, design, technical and the customer the invention was redesigned. The result of this was a simplified version with no main hub and only a local connection between the detector units. Further the detector units were split into two different models: one only with battery and one that are both with a battery and a connection to the permanent electrical grid. Each was also optimized so that it would be more resilient to dust and insects. The dismounting tool was redesigned so that it would be easier to use with different poles to extend the reach. A list of Unique Selling points for our product was created: Simple to install, easy to maintain and service, are able to be inter-connected with other GADE smoke detection units, use either with or without permanent connection to the grid, beautifully designed, comes with an unique dismounting tool. Using Modular Function Deployment the product was modularized to reduce production cost and diffi-culty of product upgrades. The dismounting tool was split into two modules and the detector unit into 4 modules. Furthermore the product was optimized for production using Design for Manufacturing, re-sulting in a reduced manufacturing cost of 12,3 %. The parts for production will be bought from sub suppliers and assembled in Denmark for a period of 5 years. It will be complying EU standards and can be sold all over Europe. The main distribution channels will be direct sales through physical and web based retail stores. There will be spend 50.000,- per year on promotion in magazines. The product would be sold to the retailers at the following prices: Wired smoke detector: 149,- DKK, smoke detector with battery: 129,- DKK, dismounting tool: 49,- DKK, package containing one of each: 299,- DKK. The economic aspects of the product for the next 5 years were investigated. In the optimal scenario, were the sales forecast will be fully meet, there is a payback period of 2,11 years, an Internal Rate of return on 73% and a Net Present value of 1,1 mil. DKK. On this the product seems highly profitable, however there are a number of considerations. Based on a sensitivity analysis the single most sensitive parameter was a decrease in selling price. Furthermore the calculations were made on a number of un-certain numbers. The recommendation is to invest some time and money in really assessing all the risks. The group’s recommendation is to not launch the product. There would be too high a risk as a start-up company to develop and sell the product. This type of product is declining if you look at it from a tech-nology point of view (using the S-curve approach). The market are changing towards more intelligent solutions such as NEST (Smart fire detecting systems) that are increasing in technological capabilities and decreasing in price. If the product should be launched it should be done together with existing companies. The design and the idea is ours, but could be launched under that companies name.
SubjectsFire prevention -- Equipment and supplies, Fire detectors -- Design and construction, Incendis -- Prevenció -- Aparells i accessoris, Detectors de foc -- Disseny i construcció
URIhttp://hdl.handle.net/2099.1/24225