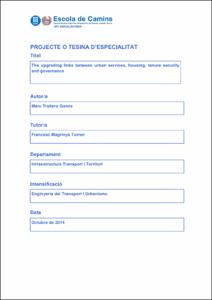 Document typeMinor thesis
Rights accessOpen Access
Abstract
The evolution of the urban conditions is divided into three different “acts”. These are land plot (P), housing(H), and urbanization (U). Solà Morales pronounced in 1993 that “the analysis between their evolution [of each one of these three acts] implies to separate and analyze [them]”. Magrinyà , by the way, in 2005 stated “The different combinations of these three elements will delimit the distinct forms of urban growing. The ideal sequence would be to preserve a space in order to put the streets and urban services network, then the land plotting [...], and finally, the building of the edifications. The combination of these mechanisms is not always like that.” In low-income surroundings, plotting, housing and urbanization are and remain (usually) in their lowest level. Their tough conditions and their common inability to invest in them or to pay for some services make them generally unable to increase their conditions to a higher level. This peop le would generally live in a house built by themselves with what they have, in a land they don‟t own or even rent to anyone, and practically without any service (they give much importance to waste collection, sewerage and potable water access).So, considering this the lowest level and the complete consecution of the acts the highest, we have a range of “levels” between them, which increment is called upgrading. The main objective of this minor thesis is to understand how the mechanisms work to make this upgrading happen, and most importantly, to look for ways, procedures or policies that make an upgrading in one of the fields to incentivize one (or various) of the others.
SubjectsCity planning, Urbanisme, Urbanisme
URIhttp://hdl.handle.net/2099.1/24221
Collections
Share: