The 24-hour metropolis: "mixed-use" intervention in building a thrive neighborhood 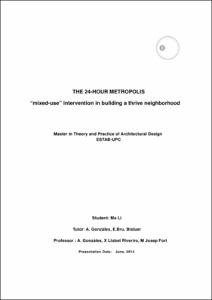 Document typeMaster thesis
Rights accessOpen Access
Abstract
“24-hour city” concept in the urban development project in building a mixed-use central spine in Barcelona. Besós River has long been considered as a border to the Barcelona Metropolitan, and the whole city has been broken into two parts. There exists a gap caused by unbalanced developments in terms of economic, social, culture..etc. Barcelona metropolitan has payed abundant attention to encourage connectivity, exchange and mix uses in order to have a thrive environment and build 24-hour city. On the contrary, across the river , as an immigration town, the poverty is the main image when we talk about the other side of river. The thesis is concretized the hypotheses through the analysis on the main principles of urban development in Favela-Bairro Program1 by Jorge Mario Jáuregui and his team’s work in Rio de Janerio, Brazail, City of Melbourne´s Policy for the 24 Hour City2, Central Park in New York and concerning on the social context and actual condition in Barcelona, the new principles for the action are proposed, which mainly focus on multifunction, accessibility, connectivity, new centrality in giving the new definition to Besós River Park as a central spine in metropolitan. In the current condition, we try to use the Besós River Park link Santa Coloma de Gramanet with Barcelona City, and aside from the existing bridges, several pedestrian bridges are proposed to knit together the two sides along the river, as if they were string knitting two different urban fabrics, besides, a large scale urban project, must go further to the existing physical soundings and demands of citizens, we take the opportunity to think over the using and abandoned industrial area along the Besós River and give them a chance to transform into a mixed-use sequence till the mouth to the Mediterranean Sea in order to have different sorts of activities in a city so that the neighborhood aside and the whole citizens will benefit from its thrive atmosphere, and post-industrial intervention and artificial typography will be manipulated to the relevant area along the sequence.Thinking of changing the image of the area, a new network of iconic landmarks will be set in these three strategic areas along the Besós River Park. The theory proposed in this thesis supports the project of students Iago C. Ko and his partner, which propose a mixed-use extension for the beer and chocolate drink factories in Gan Zam area, Santa Coloma de Gramanet. And as a starting point of the central spine, it will focus on transforming the industrial area into a urbanistic one. The mixed-use, 24-hour central spine is a combination of residential, commercial, culture and recreation, which stimulates all citizens with distinct backgrounds to share different experiences from day to night. With its new features of multifunction and connectivity, Besós River Park is transforming from urban park to a central spine which is balancing the expectations of residents and visitors 24 hours a day, seven days a week in order to give a new centrality to this new central spine park in Barcelona. The improvement on environmental conditions contributes to have a thrive neighborhood along the new central spine park integrating the informal one into the whole metropolis.
SubjectsUrban renewal -- Spain -- Santa Coloma de Gramenet, Sociology, Urban -- Spain -- Santa Coloma de Gramenet, Rehabilitació urbana -- Catalunya -- Santa Coloma de Gramenet, Sociologia urbana -- Catalunya -- Santa Coloma de Gramenet
Location
1: Santa Coloma de Gramenet, Barcelona, Espanya
URIhttp://hdl.handle.net/2099.1/24194
Collections
Share: