Solar cooling of buildings in a Swedish climate 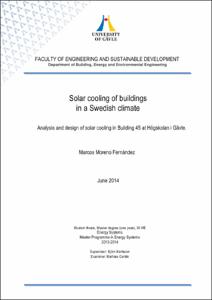 Show full item record
Moreno Fernández, Marcos
Tutor / director / evaluatorKarlsson, Björn
Document typeBachelor thesis
Rights accessOpen Access
Abstract
Nowadays Solar Energy is one of the engineering fields most exploited, due to the ongoing need to developing new technologies based on renewable energy or improving the existing ones. One particular application of this kind of energy is Solar Cooling, which consist in generating cold from the heat received from the Sun. A common installation of solar cooling requires solar collectors, an absorption/adsorption chiller, fan coils, piping, valves and pumps. It calls for a minimal preventive maintenance which should allow keeping operating conditions within certain limits. The aim of this work is to analyze the viability of the installation of a solar cooling system in a roof. It has been chosen the Building 45 of the University of Gävle (Hus 45) as a pattern design. It was built in 2008, thirteen years after Högskolan i Gävle was inaugurated. This building uses electric compression coolers for its cooling demand. According to their heating demand, this is solved by using District Heating. This work is focused on the determination of the cooling demand of this particular building and the proposal of a solar cooling system that could supply it. Calculating the cooling demand means applying most of the concepts learnt during the whole speciality of the degree, like thermal loads in buildings. This calculation has been possible by using IDA ICE, which is a software that allows the user to develop a new construction through defining all structure parameters. After having defined all the contour conditions, the simulation shows all kinds of parameters in detail, in particular, the cooling demand of the respective building. Moreover, creating a new solar cooling system for this building means reviewing all the concepts related to refrigeration cycles and solar energy that have been learnt during the intensification. To do it, it has been necessary to use POLYSUN, another program that let the user to create solar thermal systems, photovoltaic systems or any other installation for getting heating, cooling or hot water. In addition, another important point to discuss is the usage of a solar cooling system based on absorption/adsorption technology instead of using photovoltaic as a way of providing to the current cooling units. The simulation about the cooling demand of the building shows that for covering the 95,22% of the operation hours (within the study), it is required to solve a cooling peak demand of 100 kW, which is in terms of energy a value of 68437,6 kWh. Regarding the designs of the solar cooling systems, two variants have been analyzed. While the first one is based on using the absorption technology, the second one has two subdivided proposals: a stand-alone photovoltaic system and a net metering installation. The absorption system could cover the cooling demand with the exception of July. The viability of this installation is questioned because of the low operation hours of the absorption machine, which is not working as it was expected since it is the cooling tower who really carries out the cooling function. On the other hand, the stand-alone system allows the building to cover all of its cooling demand, but the system is oversized and no profitable within a period of 30 years although it supposes a reduction of 100% in CO2 emissions, which is obvious since this option considers an electrical consumption from the grid of 0 kWh. Finally, the net metering system is probably the best option for covering the cooling demand of this building, as it has the shorter pay-back (18 years), the less visual impact when the solar modules are installed on the roof and requires less maintenance. Since there are no advantages in using an absorption machine for a cooling system in a Swedish climate, the next step would be analysing a system like the one proposed into another climate, where the solar radiation has more influence, thus, the absorption machine could work because of the inlet water (coming from the solar loop) is hot enough.
SubjectsSolar air conditioning, Swedish -- Climate, Aire condicionat solar, Suècia -- Clima
URIhttp://hdl.handle.net/2099.1/24073
Collections
Share: