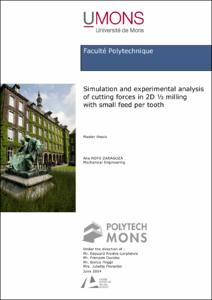 The increasing trend among several manufacturing industries of producing precise and complex micro-pieces with three-dimensional geometries and shapes has forced researchers to develop new micro-techniques. Micro-milling is a key technology characterized by a material removal performed by mechanical interaction between a tool with sharp edges and a workpiece. Cutting force prediction at micro-scale is an important research field in order to enable correct choice of cutting parameters, correct design of micro tools and estimation of machining tolerances. This work aims to determine if the finite element model taken as an input for a global dynamic model is accurate enough to simulate experimental measurements, therefore a simulation approach and experimental tests are performed to be compared. The dynamic simulation software employed is DyStaMill which has been developed in the faculty of engineering. The software is based in three fundamental aspects: modeling of the cutting forces, modeling of the surface generation and prediction of the displacement between the tool and the workpiece. The experimental plan followed comprises slot milling tests and shoulder milling tests with small feed per tooth and several cutting parameters to titanium (Ti6Al4V) workpieces. The calculations for the developed cutting force model are compared to the experimental findings. The comparison shows significant differences between measurements and simulation on the values of the efforts. These differences can be explained by the cutting edge radius which is different between simulations and experiments and to a possible effect of cutter run-out. Finally, an inverse analysis confirmed the validity of the model when correct input parameters are given.
SubjectsMilling-machines, Cutting machines, Microstructure, Fresadores, Talladors, Microestructura
URIhttp://hdl.handle.net/2099.1/23845