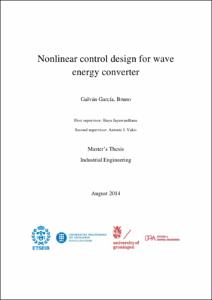 In this thesis, we study the optimization of a single-piston pump system for use in a new wave energy converter by using a feedback mechanism. The first part of the thesis is dedicated to the optimal determination of control variables using the dynamical model of the single-piston pump system, which is a switched system that is built on first principles and describes the dynamics of four main important elements of the system: the buoy, the rod, the piston and the pumped water. Using the Analysis of Variance method, it is found that the two optimum control variables are the area of the piston, as expected, and the mass of the buoy. The second part of the thesis deals with the design of optimal feedback control where the area of the piston is the chosen control variable. The control method is based on the well-known Model Predictive Control that has been adjusted to our switched system. Our simulation results show that the proposed control method is able to reach performance close to the optimal one.
SubjectsTidal power, Energy conversion, Predictive control, Energia maremotriu, Energia -- Conversió, Control predictiu
URIhttp://hdl.handle.net/2099.1/23830