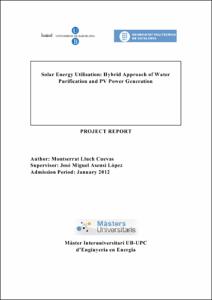 The aim of this project is to characterize a hybrid unit for the production of drinking water and electricity by means of solar application. From the scientific point of view, photocatalysis and photovoltaic effect are built on the same fundamental taking both profit of sunlight; photochemical processes use high-energy photons to promote specific chemical reactions and photovoltaics depend on the threshold photon above which an array of electrons will conduct electricity. A photocatalytic flat reactor works in tandem with a solar cell, which is attached immediately under the photoreactor. The uses of solar radiation are distributed as following: Ultraviolet range of the spectrum will be absorbed for photocatalytic purposes; Visible light will be used by the solar cells, and water will absorb Infrared. The system takes advantage of a wide band of solar spectrum improving the efficiency of the whole system. Experiments are conducted under sunlight to optimize detoxification and production of electricity. Results revel the possibility to combine both technologies. It is also proposed a larger-scale plant based on the hybrid system. A cost-effective hybrid solar electricity and water purification system is described for meeting the needs for electricity and clean water in a single integrated, autonomous and affordable system.
SubjectsSolar energy, Photovoltaic power generation, Energia solar, Energia solar fotovoltaica
URIhttp://hdl.handle.net/2099.1/23677