Numerical simulation and analysis of a heat pump system combined with thermal storage tank for DHW supply, controlled through a demand side management strategy 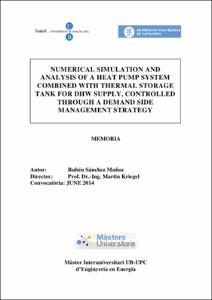 As general conception, this project is aimed to develop a software simulation model based on TRNSYS simulation platform which should help in the analysis and implementation of domestic Demand Side Management (DSM) strategies, based on load shifting techniques, as management tool for residual load and surplus of energy associated to renewable not dispatchable power sources like wind power or photovoltaics. The reference framework of the study, which sets real boundaries and limitations of the present work, is to develop and analyze a novel domestic descentralized energy storage system formed by a heat pump system combined with thermal storage tank that applies a DSM strategy of load shifting between valley and peak periods. The DSM control strategy implemented by the system is what, in fact, makes novel this usual configuration. The work analyzes the simulated behaviour of a DHW supply system for a single-family house located in Berlin, considering its weather conditions and its particular energy demand. Six different days (corresponding to the colder season of the year) and two basic systems configurations (according to normal commercial solutions) have been introduced in the model. After the simulation process the obtained results have been in depth analyzed in order to obtain a better understanding of the system and its potential. Additionally new study paths that could be later explored have been proposed. The choice of the scenario has not been a random decision and obeys to a special motivation; according to German government’s energy and climate policy, during next decades renewable power source, in general, and renewable electricity, in particular, will increase dramatically it contribution share to final german electricity feed-in. The expected development of higher proportion of electricity generated from uncontrollable sources will require facing some still not solved challenges to assure correct grid integration of these sources. Smart grids development and residual load and surplus of energy management tools will play a fundamental role in the final success of such an imposing challenge.
SubjectsHeat pumps, Heat storage, Dwellings -- Energy consumption, Bombes de calor, Calor -- Emmagatzematge, Habitatges -- Consum d'energia
URIhttp://hdl.handle.net/2099.1/23541