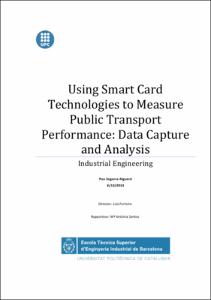 Show full item record
Pau, Segarra Algueró
Tutor / director / evaluatorFerreira, Luis
Document typeMaster thesis (pre-Bologna period)
Rights accessOpen Access
Abstract
This project investigates a series of benefits arising from the use of smart card technologies apart from the ones they were initially conceived for. The purpose of this project is to use real smart card data from passengers provided by the transit authority in Brisbane, Australia. Two bus lines were studied, concerning some aspects of the travel time reliability and passenger demand. The aim was to show that smart card data could also be used for purposes other than the ones for which smart card ticketing systems were designed (mainly revenue collection). The first part of the project intends to review the reason for the success of smart card ticketing systems over other traditional methods of fare collection. Then, focus is moved on to the stage of processing and analysis. In this stage performance data was extracted from passenger records in order to investigate the adequacy of smart card data to provide public transport performance indicators. This was done in two stages: the first one was focused on the method of data extraction, by designing a universal algorithm capable to extract useful data, not only for the scope of the current project but also that could be used on other possible future studies. Next, a data analysis phase was performed, in which the intention was to show examples of results and discern in what cases the method could be useful and the limitations concerning the approximations and length of the project. Finally there are chapters dedicated to project planning, sustainability and cost breakdown,as well as conclusions and future similar studies that could be derived from this project.
SubjectsSmart cards, Local transit, Targetes intel·ligents, Transport públic
ProvenanceAquest document conté originàriament altre material i/o programari no inclòs en aquest lloc web
Location
1: Brisbane Queensland 4000, Austràlia
URIhttp://hdl.handle.net/2099.1/23410
Collections
Share: