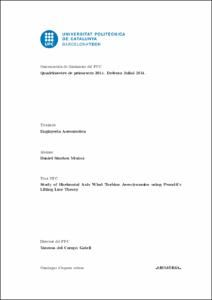 Except where otherwise noted, content on this work is licensed under a Creative Commons license : Attribution-NonCommercial-NoDerivs 3.0 Spain
Abstract
In order to accurately model large, advanced and efficient wind turbines, more reliable and realistic aerodynamic simulation tools are needed. In this project a code to compute the aerodynamics of a Horizontal Axis Wind Turbine is developed. The formulation is based on Prandtl's lifting line theory and assuming a helical prescribed wake of the rotor. To develop this code, another code to compute the wing aerodynamics based in Prandtl's lifting line is developed. This wing code is also explained and validated in this project. Furthermore, the formulation of the numerical lifting line and its adaptation to compute the wing and rotor aerodynamics is presented. The HAWT code is expected to predict the tangential and normal forces to the rotor plane and the results coming from numerical and experimental comparisons are presented. Finally, further code improvements are suggested
SubjectsWind turbines--Aerodynamics, Aerodynamics--Computer simulation, Aerogeneradors -- Aerodinàmica, Aerodinàmica -- Simulació per ordinador
DegreeENGINYERIA AERONÀUTICA (Pla 2004)
URIhttp://hdl.handle.net/2099.1/23399
Collections
Share: