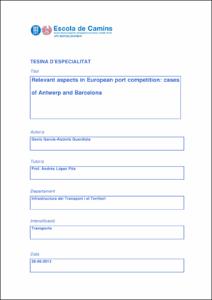 Document typeMinor thesis
Rights accessOpen Access
All rights reserved. This work is protected by the corresponding intellectual and industrial property rights. Without prejudice to any existing legal exemptions, reproduction, distribution, public communication or transformation of this work are prohibited without permission of the copyright holder
Abstract
After a long economic cycle marked by steady growth, the current crisis forces several European states to face a restructuring of their growth models if they want to keep the wealth creation and the welfare state. At the same time, the gravity centre of the global production and consumption has shifted from the Occident to other regions such as Asia and Latin America, causing an increase in international trade and the consolidation of large global supply chains. Hence, European growth opportunities lie on the opening of its economy to the outside. It is in this context that ports and infrastructure become key elements in order to channelize the arrival and departure of goods, allowing the generation of added value that may provide wealth to the territory. Therefore, considering the existing wide range of ports in Europe, states, regions and port authorities are meant to maximize their competitiveness if they want to attract these new trade flows and consequently remain on the European port market. In this competition, data shows a clear dominance of the North Sea ports over the Mediterranean ports, enlarging economic differences between northern and southern Europe. For this reason, the analysis of the source of this divergence becomes important, from both a macroeconomic as well as from an infrastructure endowment point of view, in order to provide solutions that may help southern countries to be competitive and take advantage of the current trends in the global economy. In line with this analysis, detailed observation of the characteristics of ports and hinterlands of the north, as well as their infrastructure governance, can also be a good tool to improve the position of the Mediterranean ports and the competitiveness of their hinterlands. In this sense, the study of the Port of Antwerp and Flanders, being both entities world class exporters, serves as reference for ports and southern regions with growth ambitions, such as the Port of Barcelona, ​​its metropolitan area and Catalonia as a whole.
SubjectsBarcelona Harbor -- Economic aspects, Barcelona, Port de (Catalunya) -- Aspectes econòmics
DegreeENGINYERIA DE CAMINS, CANALS I PORTS (Pla 1995)
URIhttp://hdl.handle.net/2099.1/23280
Collections
Share: