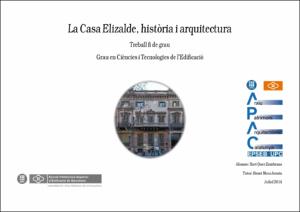 Document typeBachelor thesis
Rights accessOpen Access
Abstract
Casa Elizalde’s building was built by Emili Sala Cortés and it’s included in “Catàleg de Patrimoni Arquitectónic de la ciutat de Barcelona”. This project is about the architecture of this building and it contains the graphical current state drawings as well as an historical study to try to understand globally the building, its evolution over time and the used materials. The building has this name because of the family that lived more years there, specefically from 1895 to1964. This impressive eclectic palace has the typical structure of the neoclassical buildings from the catalan bourgeoisie who lived in the new Eixample district. The sober façade is like a renaissance palace. The building has three floors: the first floor (which was where the family lived), the service and the attic floor but over the years the house received new uses. There were new times and the size of the house allowed to receive the offices of the family business dedicated to the manufacture of engines. These uses affected the inner gradually and it lost the original splendor. In 1964 the building was sold quickly initiating a process of deterioration that only the intervention by the City Council was able to avoid. The building was included in the catalog of historic buildings in the city and then the building was bought by the City Council in attempting to turning it into an equipment. This project is based on data collection, the analysis and the current state sketches, in research and collect historical information about the building and finally in a current state photographic study . Then, with this work as a base, I could write the historical memory, graphical documentation and architectural details.
SubjectsArt nouveau (Architecture)--Spain, Historic buildings--Conservation and restauration, Modernisme (Arquitectura), Patrimoni arquitectònic
Location
1: La Dreta de l'Eixample, Barcelona, Espanya
URIhttp://hdl.handle.net/2099.1/22772
Collections
Share: