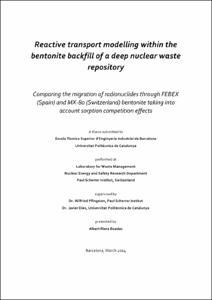 Show full item record
Riera Boadas, Albert
Tutor / directorPfingsten, Wilfried
Document typeMaster thesis (pre-Bologna period)
Rights accessOpen Access
Abstract
The geological repository is, by international consensus, the final destination for radioactive waste that cannot be permanently stored on the surface for a period of time during which security and stability can be ensured. A first aim of this thesis is to get closer to the radioactive waste management policy in Switzerland, as an example of an advanced policy worldwide in which long-term storage in deep geological formations is close to become a reality. With it, the foreseen design of this repository will be detailed, where the engineered barrier of bentonite will start playing a major role. For safety assessments of high level waste repositories, the understanding of radionuclide sorption is essential. This sorption is directly related to the transport media, which leads to the second aim of this project: comparing FEBEX to MX-80, the foreseen bentonite types that will be used, respectively, in the Spanish and Swiss geological repositories. After a number of calculations, FEBEX eventually turned out to have a better capacity to retain radionuclides, so it would be more recommendable for a repository. For these calculations reactive transport models are used. MCOTAC is a state-of-the-art code developed at PSI, which couples chemical reactions and transport processes. For performing consistently this calculations, robust FEBEX and MX-80 bentonite models are necessary. An important part of this thesis consist on the setup of these models, at real-scale dimensions, whose robustness is a prior aim. This models will be afterwards available for further research projects. Moreover, for reactive transport calculations, data coming from the Linear Free Energy Relationships (Bradbury & Baeyens, [19]) is usually used. These relationships are accompanied by an uncertainty for values of the surface complexation constants. Therefore, an analysis about the propagation of this uncertainty is necessary and demonstrated in this thesis, although apparently would not be very significant for safety assessments of a nuclear waste repository (it could become important for other applications). Eventually, the results from batch sorption experiments on Montmorillonite have demonstrated that bivalent transition metals compete for sorption sites. For safety assessments of geological repositories with compacted bentonite near fields, competitive sorption of radionuclides has to be assessed, which is another aim of this thesis. Significant influence of this competition has been found, more relevant for FEBEX than for MX-80 due to their intrinsic characteristics. Ni(II) is used as tracer for all calculations, as an example of bivalent metal (with radioactive isotopes) leaching from the canister competing for sorption sites with the saturated concentration of Fe(II) in bentonite.
SubjectsRadioactive waste sites, Spent reactor fuels -- Underground storage, Radioactive waste disposal -- Management -- Switzerland, Abocadors de residus radioactius, Combustibles nuclears gastats -- Magatzems subterranis, Residus radioactius -- Gestió -- Suïssa
DegreeENGINYERIA INDUSTRIAL (Pla 1994)
URIhttp://hdl.handle.net/2099.1/22698
Collections
Share: