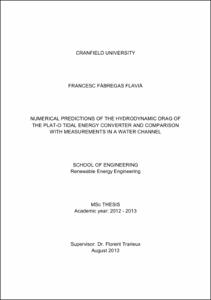 Tidal energy industry is currently involved in a strong growth phase and it is expected to play an important role as far as meeting the renewable energy targets is concerned. The product development strategy adopted by tidal energy companies is nowadays broadly based on a gradual increase of the prototypes scaling factor. Thus, the prediction of important engineering quantities such as drag at intermediate stages becomes of vital importance for developers. The diversity and complexity of the geometries adopted by second-generation tidal energy converters preclude the use of already existing drag scaling methods conceived for specific applications such as ship design. In this context, numerical simulations are regarded as a suitable alternative. This study addresses the use of Computational Fluid Dynamics (CFD) to determine the drag of the unique tidal energy converter developed by Sustainable Marine Energy (SME) called PLAT-O. Several preliminary simulations were performed on the isolated PLAT-O components. The results were compared with previous CFD studies devoted to similar form bodies and good agreement was found. Following this stage, the drag predictions on the whole PLAT-O device were undertaken and compared to existing experimental data. Significant differences between them were observed. This work has demonstrated that a RANS flow solver is not an efficient tool to predict the resistance of a small-scale PLAT-O device. In addition, this study has predicted that CFD will be suitable to assess the design of larger-scale prototypes.
SubjectsTidal power -- Mathematical models, Channels (Hydraulic engineering), Computational fluid dynamics, Energia maremotriu -- Models matemàtics, Canals (Enginyeria hidràulica), Dinàmica de fluids -- Simulació per ordinador
URIhttp://hdl.handle.net/2099.1/22688